Nu Variant- in a possible explanation of the rapid spread of the emerging “Nu” variant of the SARS-CoV2 virus, a new study has found this particular variant (B.1.1.529) has a much higher ability to infect and evade the immune response built through previous infections or vaccines.

In a study published in Nature journal, a team of researchers from India and other countries has found that the NU variant (or B.1.1.529 lineage) was eight times more likely to escape immunity gained through AstraZeneca or Pfizer vaccines compared to the original virus.

Also, the NU variant was six times more likely to re-infect people who have recovered from Covid-19.

According to the UCL during the same week, this new Covid variant accounted for more than 80% of new cases in the U.S. Health experts say it’s typical for a new strain of a virus to be more contagious because it often becomes much more efficient and easily transmitted.

In communities with lower vaccination rates, particularly rural areas with limited access to care, the Nu variant could be even more damaging. This is already being seen around the world in poorer countries where the COVID-19 vaccine isn’t as accessible. Health experts say the impact could be felt for decades to come. 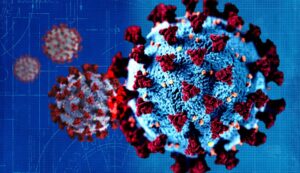 1. Nu is more contagious than the other virus strains.

2. Unvaccinated people are at risk.

3. Nu could lead to ‘hyperlocal outbreaks.’

4. There is still more to learn about Nu Variant.

5. Vaccination is the best protection against Nu Variant.

What do we know so far about this new Covid variant?

Of the 59 laboratory-confirmed cases of the new variant, three were in Botswana, two were in Hong Kong among people who had travelled from South Africa, and the rest were confirmed in South Africa.

Of course, it is not necessarily time to panic. We simply do not know enough yet about the virulence and transmissibility of this strain. And mutations can work in either direction. But it is further evidence that we cannot assume with Covid that it will naturally evolve to become less potent or simply burn out